Florida has some of the harshest drug laws in the United States that were implemented in the early nineties. Many drug crimes are felony-level, which means that if convicted you could be facing prison time. Drug trafficking and manufacturing have incredibly serious consequences that could land you a lifetime in incarceration. Hiring an experienced, aggressive, drug crime lawyer with a consistent winning record can ensure your rights and future are protected.

Drug charges can also be prosecuted in federal court, especially for higher level drug trafficking offense. Federal drug charges are nothing to take lightly especially since most involve mandatory prison minimums you are required to serve upon conviction. If you or someone you know has been charged with a drug crime in the Broward County area, then it’s within your best interest to gain experienced legal representation.

A skilled drug defense lawyer in Fort Lauderdale from Meltzer & Bell will fight for you if you face any charge related to narcotics in Broward County. With Meltzer & Bell, you will have one of our experienced partners available to you 24 hours per day, seven days per week.

We have represented clients in both the 17th Judicial Circuit courts in Broward County, as well as the Southern District of Florida’s federal courts. Drug charges involve significant penalties, but there may be strong defenses available to you. Call us today at (754) 755-8554 to schedule a free consultation.

The Florida Statutes lists out various types of drug crimes. The most commonly convicted of these drug crimes is possession of a controlled substance and possession with intent to sell. Other than these there are numerous kinds of drug crimes that can include the following: 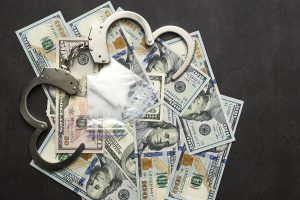 When you think of a drug crime you normally attribute to a street drug such as heroin or cocaine. You may be surprised to learn that numerous people are arrested every day for the unlawful possession, sale or manufacture of prescription medications such as OxyContin or Valium. Over the past ten years, the recreational and illegal use of these drugs have increased exponentially. Now law enforcement are more keen to charge people for illegal sale or possession of a prescription drug.

In some cases, some mixture of over the counter drugs such as Tylenol or Robitussin can also lead to criminal charges. These concoctions of over-the-counter medications can give a person a “high” effect and can lead to chemical dependency.

Some other common controlled substances under Florida law include, but are not limited to:

Defenses That Could Reduce or Dismiss Drug Charges in FL

Law enforcement often file drug charges after they pull over a person for a routine traffic stop. It could be due to the smell of a certain drug in the car such as marijuana or the officer suspects the driver is under the influence of drugs by their demeanor. Even if it “seems” apparent that you were in possession of drugs that doesn’t’ mean you can’t apply a sturdy defense that could end in reduced or dismissed charges.

The right legal representation for your case will depend on the facts. However, there are a few common defenses that are frequently used by defense lawyers, which include, but are not limited to:

Penalties for Drug Crimes in Florida

Most state drug charges are felonies. If convicted of even a third-degree felony, you will face up to five years in prison and a $5,000 fine. Your driver’s license will also be suspended for two years administratively unless you receive a hardship license. If you are convicted of a drug crime, you could face the following penalties:

Broward County was a pioneer with its drug court program used as a diversion court so the participants can avoid time in jail or prison. Under the program, a person with a substance abuse-related charge who has no prior felony convictions may seek to have their charges dismissed by going through treatment. Drug court may or may not be the best option for you. Your attorney can help you make that decision after an examination of your case.

The federal government, under the Controlled Substances Act, has also prohibited the sale, manufacturing, cultivation, trafficking and even mere possession of many, many drugs. While most drug charges are at the state level, the feds are very active in pursuing prosecution of narcotics-related offenses.

Federal drug laws are often enforced by the Drug Enforcement Agency (DEA), who frequently investigate trafficking operations. However, suspects may be pursued and arrested by any federal law enforcement agency, including the FBI, Customs and Border Protection, the Coast Guard, the Transportation Security Agency or others.

Broward County is in the Southern District of Florida. If accused of violating federal drug laws, the U.S. Attorney will prosecute, and the charges will be heard in a federal court, such as the one in Fort Lauderdale.

Your drug lawyer must be licensed to practices in the Southern District, and should be familiar with Federal Rules of Procedure and Evidence. Our defense attorneys at Meltzer & Bell are licensed and experienced in the federal courts in the region.

Broward County Drug Court – Created in 1991, Broward County had one of the first treatment programs serving as an alternative to those accused of crimes involving controlled substances.

University of Florida Drug Policy Institute – Part of the Department of Psychiatry, the DPI conducts research on policy relating to drugs and substance abuse.

High Intensity Drug Trafficking Areas Programs – The HIDTA program was created by Congress with the Anti-Drug Abuse Act of 1988. The program provides assistance to Federal, state, local, and tribal law enforcement agencies operating in areas determined to be critical drug-trafficking regions of the United States.

Act today if you face accusations of a narcotics-related offense in Broward County. Our advice is you call an experienced Fort Lauderdale drug defense lawyer at Meltzer & Bell. We have been working tirelessly to defend people accused of crimes for years and want to utilize our years of experience for your case.

We will immediately begin working on your defense to seek the best possible result, whether you face state charges in the 17th Judicial Circuit or federal charges in the Fort Lauderdale U.S. Courthouse. Call (754) 755-8554 today to set up a free consultation. Meltzer & Bell defends people throughout the Fort Lauderdale area including Pompano Beach, Hollywood and Coral Springs.