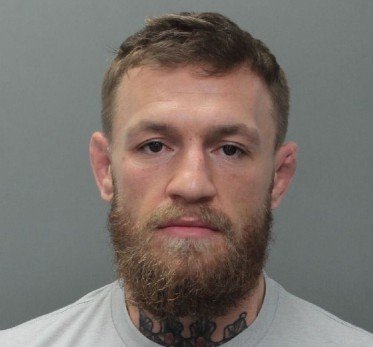 Conor McGregor, mixed martial arts super star, was arrested Monday morning for demolishing a fan’s phone. At around 5 a.m., McGregor was leaving the Fontainebleau Miami Beach Hotel when he was met by a fan attempting to take a photo of the former UFC Featherweight and Lightweight Champion.

McGregor apparently was not interested in a photo op and according to the police report “slapped” the fan’s phone out of his hand and then proceeded to stomp on the phone several times before finally picking the device up and walking off with it. The victim valued his phone at $1,000.

McGregor was later arrested at the $3.75 million waterfront home on Biscayne Island west of Miami beach he had been staying at with his family. For putting his “signature” on the victim’s phone, McGregor was charged with a felony count of Strong Arm Robbery and a felony count of Criminal Mischief. You can see the Miami Beach Police report below:

In Florida, criminal mischief is the crime of willfully damaging the real or personal property of another. Crucially, if the value of the property damage is greater than $1,000 then the charge becomes a third-degree felony. A third-degree felony carries a potential punishment of a $5,000 fine and up to 5 years in prison. Had the phone been valued at less than $1,000, McGregor’s charge would have only been a misdemeanor with a maximum jail sentence of 1 year.

The charge of Strong-arm robbery against McGregor is a second-degree felony that carries a possible 15 year prison sentence and a possible $10,000 fine. Had McGregor stopped at simply stomping on and destroying the phone, there would have been no robbery charge. Once he took the phone by force, intending to deprive the victim of his property, the crime became a robbery.

Convictions for either offense would effectively end McGregor’s fighting career. In April of last year he was able to avoid a felony criminal mischief charge in New York after he attacked a bus in Brooklyn’s Barclay Center that contained his rival Khabib Nurmagomedov, smashing the bus window with a dolly. The shattered glass injured several fighters and caused three fights to be scratched from the UFC 223 card. In that case, McGregor plead down to a misdemeanor charge of disorderly conduct and served five days of community service instead of a prison sentence.

McGregor then faced Nurmagomedov at UFC 229 who submitted him in the fourth round in the biggest UFC fight of all time. After that fight the deposed champion got into a dispute with and punched Abubakar Nurmagomedov, Khabib’s cousin. McGregor was fined $50,000 and suspended for 6 months by the Nevada State Athletic Commission. He would have been eligible to compete again next month but with new criminal charges against him, he may not be fighting inside the octagon anytime soon.